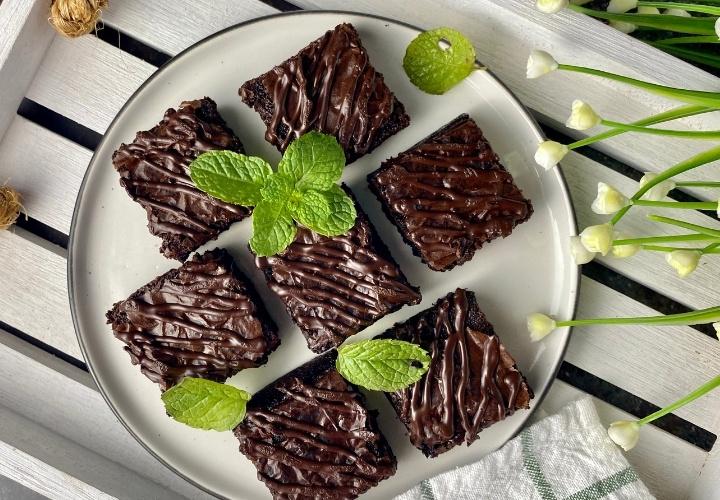 The Ultimate Vegan Chocolate Brownies – Let’s dive into chocolate goodness or to be more precise, let’s talk about brownies because these are my absolute favorite.

Zoom in a pile of tasty homemade vegan chocolate brownies served on a beautiful serving plate.

Ever since I was living with my parents and before I went to college, brownies with Ghirardelli, have been a favorite dessert choice in our home, in case we had to make dessert.

It didn’t matter to us that they came out of a pack. My mother made the best brownies I ever tasted and it was a ritual.

Two brownies were served on a pile of two beige plates and another two on a creased gray tablecloth with a jar of chocolate chips spread across the bench or table.

And the greatest part was that after the mixture was whisked with some neutral oil and egg and the batter was placed in a plastic (silicone) baking dish, there was always some leftover batter in the bowl and me and my siblings did a great job at vanishing it.

By that point, I had been busy in the kitchen on my own and I thought brownies don’t look challenging to make, right?

But boy I was wrong. If I exclude the eggs, butter and oil, these actually were a bit hard to make, well at least to make them perfect.

It took me lots of trial and error to find the perfect vegan chocolate brownies recipe and I’m proud to share it with you now as a treat. 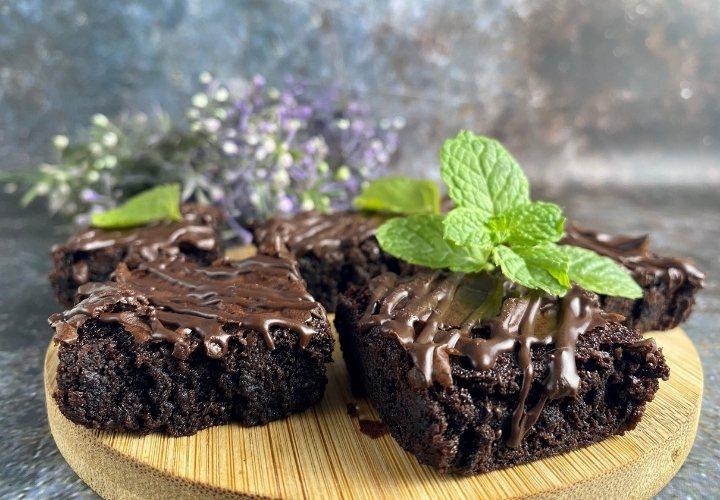 These brownies feature a robust 3X amount of chocolate in three forms:

-Whole chocolate chips are added last to the mix, just before they hit the oven.

The more chocolate goodness these contain, the better for me. I have found the perfect sweet spot.

There are some other perks that I absolutely dig about these sweet babies, besides being super delicious and vegan.

Believe me, I’ve made these a zillion times so what I’m telling you is not an exaggeration, these are the best vegan brownies I’ve ever made and they are so good that you won’t notice the butter and eggs missing at all.

The Best Vegan Brownies Ever

These are the top vegan brownies here, a 3X dose of chocolate that will surely satisfy all your longings for chocolate. A crunchy crust and a liquid fudge-like center packed with chopped walnuts and chocolate chips. 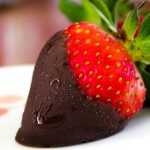